E-waste is a huge problem in the world today, and it’s only getting worse. In fact, according to the BBC, the U.K. alone produces 1.45 million tonnes of e-waste every year, with the number continuing to rise.

Spring Research predicts that the UK will be the leading contributor to e-waste in Europe during the next three years.

Improved technology and the desire for the latest smartphone has led to an increase in the production of new devices. However, with each passing year, more electronic equipment becomes obsolete. It results in many discarded electronics that are not recycled properly.

Only 12% of all mobile phones sold in the U.K. are recycled.

This means that 88% of these devices are dumped in landfill sites or stored at dumpsites, where they can cause problems for the environment.

The environmental impact of this waste can be devastating. These items contain toxic chemicals, and if they aren’t disposed of correctly, these toxins could enter our water supply system, posing a severe threat to human health.

In addition to these dangers, the disposal process is harmful to our environment. We need to find better ways of dealing with old phones before they become obsolete.

Here are some ways refurbished phones can help the environment:

Imagine the amount of power consumed during manufacturing when you buy a new phone—all the human resources needed to produce the device and the materials required to make it happen.

Every year, 1.4 billion mobile phones are produced around the world

According to researchers, creating a new smartphone uses the same energy as operating and charging a phone for ten years.

Now imagine what would happen if you bought a secondhand one instead. You pay less money for the same phone but at the same time use less electricity and less natural resources.

With refurbished phones, the demand for new phones is reduced while the energy demand is also lowered.

With the advancement of smartphones, more resources have to be mined.

As a result of the mining of these resources, significant amounts of CO2 enter the atmosphere, impacting nature in many ways, including contributing to climate change, pollution, and other disruptions.

Despite advances in smart devices, no progress has been made in reducing CO2 emissions during production. Moreover, a bigger and better model could have a detrimental effect on mining and emissions. 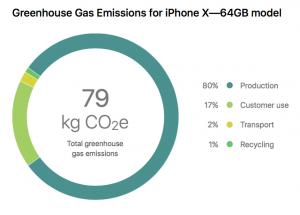 If you purchased a used phone, you wouldn’t be contributing to the increase in CO2 emissions since you would already have access to a phone manufactured at a much earlier stage.

As a result, you are reducing your phone’s carbon footprint.

Better Use Of Resources

On Earth, 17 metals have been classified as rare. The average smartphone contains 16 of them!

A large number of resources used in production are nonrenewable. It is challenging to mine neodymium, terbium, and dysprosium, but they are also limited in supply; they won’t be replenished.

Most minerals used in phones come from nations with poor environmental and labour standards.

Conflict minerals such as coltan, cassiterite, wolframite, and tungsten are mined by companies using child labour. They are sold to manufacturers who use them in their products.

These minerals are often found in conflict areas where armed groups control the mines. This leads to violence and corruption.

In addition, some countries have banned the export of certain minerals because of their scarcity or potential harm to the environment.

It means that when you purchase a used phone, you will be using fewer resources than if you were to buy a brand new phone. This is because every component in a smartphone must be produced separately, and each part requires a certain amount of raw material.

Furthermore, this makes using refurbished phones an environmentally friendly and sensible option. We save more resources by reducing the demand for new devices.

We can help protect our planet by choosing to purchase a refurbished phone instead of a new one.

Which Manufacturers Use Conflict-Free Minerals?

Results showed that only two brands used a greater percentage of conflict-free minerals. Fairphone and Apple are among them. Each of these companies has committed to sourcing their minerals from conflict-free sources or certified smelters. 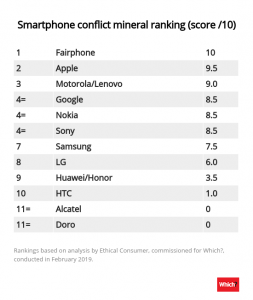 Ethical Consumer describes Fairphone as meeting most of their conflict minerals criteria compared to other brands. Apple lacks transparency in one particular area – it does not disclose which of its smelters have been audited and are conflict-free.

About 10% of global e-waste in 2019 came from smartphones, weighing more than 50 million tonnes, according to a report from the UN.

Manufacturing smartphones creates an enormous amount of waste. As a result, old phones end up in landfills or incinerators, where they cause damage to the environment and harm to people who live near those facilities.

Most recycling plants burn old electronics rather than properly dismantle them. It results in toxic chemicals like mercury being released into the environment, which can cause serious health issues.

Instead, why not sell your old phone to someone who will reuse it? They’ll get a device that can circulate while you get cashback for something that was once useful to you. This way, you’ll also support local businesses while getting rid of an unwanted item in the process.

If you have an older phone, you should consider trade-in options to stop contributing to the growing e-waste crisis.

Circular Economy For A Sustainable Future

In a Circular Economy, all materials are reused, recycled, and repurposed before they reach landfill sites.

When we do so, we reduce waste and pollution, which helps preserve natural resources. In turn, this benefits us all because we don’t need to produce as many raw materials.

By following the circular economy approach, we can ensure less impact on the environment.

When you buy a reconditioned phone, you create 80% less waste than a new one

The circular economy will increase the efficiency of our resource usage. It’s about making better choices when buying products so that we don’t contribute to the problems caused by overproduction.

We should all strive to become more sustainable, but many ways to do this. Buying a refurbished phone is just one small step towards a greener future.

Make A Difference With The Big Phone Store

At The Big Phone Store, we’ve been in the business of saving phones from landfills since 1999. We know how important it is to keep old phones out of the landfill and give them a second chance at life.

Our goal is to make sure that everyone gets paid for their old smartphones. That’s why we offer trade-ins and pay top dollar for all types of phones.

Refurbishing is an alternative to the overproduction of raw materials and low CO2 emissions. It helps us reduce the impact of manufacturing and increase the number of recycled products.

However, refurbishing still has environmental impacts; when transportation or replacing

And to produce one smartphone, 44.4 kg of natural resources (minerals) are needed, not to mention the energy used in their production.

Here is the average influence of a new vs. refurbished smartphone:

The Big Phone Store recycles around 100000 phones per year.

In 2021 by buying refurbished phones, our customers had prevented:

Using smartphones responsibly and reducing our consumption can make a difference. We can quickly reduce the environmental impact of its production and its destruction by extending the product life cycle of a phone.

If everyone did this, we could cut down on plastic waste in landfill sites and oceans.

Give Your Old Phone a new life!

You can reduce the number of raw materials mined and energy used to produce more phones, and the packaging used to transport them-and make a difference in the environment.

By reselling, you not only make some extra cash, but you are also helping someone out.

This way, you’re contributing to the growth of the global market and increasing the availability of devices.

With the help of The Big Phone Store, you can get a great deal on your old smartphone. When you sell your old phone to us, you are doing something positive for the environment.

Your old phone will be reconditioned instead of ending up in a landfill. It reduces the demand for raw materials and saves energy.

Your old phone is valued based on its condition and features. We pay fair prices for used smartphones.

The Best Big Button Phone Available in 2022   Huawei FC312E     The Huawei FC312E is the perfect big button phone for any elderly people, as well as people with hearing difficulties. It is Read more…

Best Mid Range Phone to Buy in the UK

Best Mid-Range Phone To Buy in UK – 2022 Mid-range or budget smartphones are getting better with every launch. These phones offer everything from performance to style and durability, and you don’t have to spend Read more…

Best Budget Samsung Phone in UK 2022 Samsung is best known for its top-quality smartphones and tablets, but it also has a range of budget phones that are reasonably priced and feature outstanding performance, camera Read more…